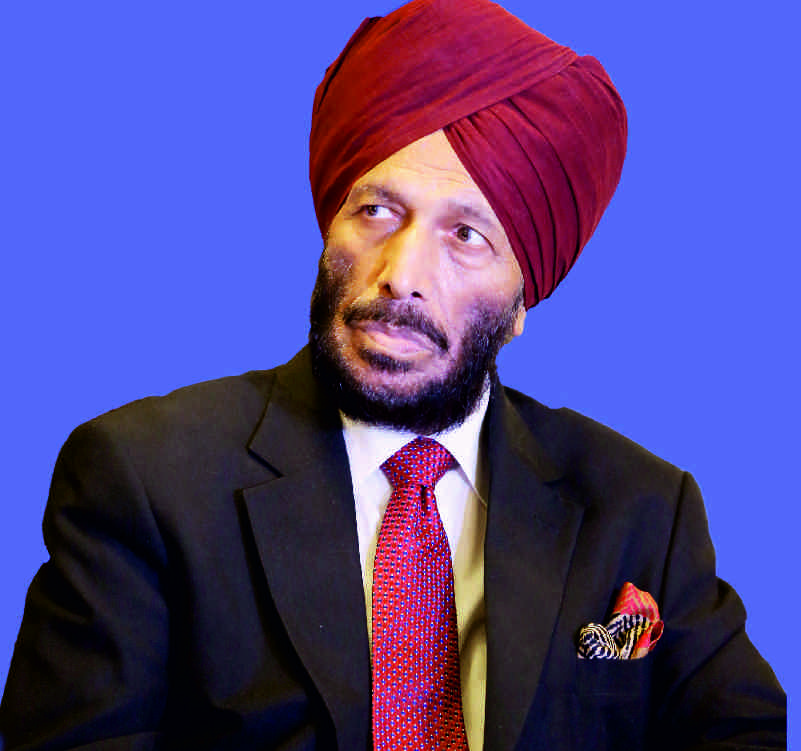 While growing up my introduction to Milkha Singh, better known the world over as the ‘Flying Sikh’, was exclusive via jokes. I did not have the slightest idea about his track achievements, as Milkha Singh for me was some speedy village peasant who, while chasing thieves, had left them far behind and become the butt of every ‘Sardar’ joke.

Not to mention that my seeking an appointment with him a few years ago also turned into a joke. Well, almost! When my friend Randeep Singh Nabha (Congress MLA and Milkha’s golf partner) handed me the phone after speaking to Milkha, the Flying Sikh without losing an instant asked me about my health, and how I was coping at the age of ninety-eight. He had obviously mistaken me for the older Khushwant Singh. On realizing that it wasn’t him, he asked, ‘Tussi pher kede Khushwant Singh ho (than which Khushwant Singh are you)?’After I told him that I was Fauja Singh wala Khushwant Singh since I had written his biography, Turbaned Tornado, he graciously agreed to an interview.

Humour aside, my meeting with Milkha Singh at his Chandigarh residence can be described as nothing short of a pilgrimage. Dressed in a suit, tie, and his signature red turban, it was a strange feeling to know that I was in conversation with a man who had conquered the world running races, barefoot.

Reality dawns when he starts narrating his story, and you say, ‘Heck, no wonder he was the subject of a recent Hindi film. Poverty, tragedy, hard work, resilience, willpower and fame are elements movie wallas look for in a dream script, and Milkha’s life has it all.’

No one knows Milkha’s exact birth date, except that in the year 1935, on a dark winter night in village Gobindpura, Kot Addu tehsil of the Muzzafargarh district in Pakistan he was born under a thatched roof of his meager house. (His birthday is now celebrated on 20 November, a date that he acquired for official reasons.) Milkha Singh originally hails from Rajasthan and his family at some point had shifted to Gobindpura. His father, Sampuran Singh was a marginal farmer and the meager piece of land provided the family with food, cattle, and fodder. His mother, Chawali Kaur was a homemaker, and Milkha’s memories of her are vivid in his mind. He remembers her sitting next to a chakki and grinding wheat for the chapattis for their huge family comprising, besides Milkha, seven more siblings as that of four brothers and three sisters.

Even though hardship, poverty, and adversity were a way of life for Milkha’s family, his father, however, was keen to educate his sons so that they could improve their status. His dream hit a dead end when Milkha’s older brother, Makhan Singh ran away from home to fulfill his dream of joining the army. This episode had a telling impact on Milkha’s father, but what it also did was shift Sampuran Singh’s focus on Milkha. He now saw in Milkha the only way in which he could fulfill his dreams and ambitions. Milkha was admitted into a school in a nearby village. The school functioned from under a tree, where children wrote on wooden boards with wooden pens and sat on mats listening to their teacher, Maulvi Ghulam Mohammad. Giving a rap on the knuckle with a neem tree twig was a normal thing for the maulvi. Milkha got his fair share of raps since concentrating on lessons was not his forte. He was only interested in after-school activities, such as playing with his friends.

After completing his class five from the village school Milkha was sent to a government school in Kot Addu, about ten kilometers away from Gobindpura. The stretch to school was like an obstacle course. Since he did not possess a watch, Milkha, and another student, Sahib would set on their two- hour long arduous journey to school after the train to Multan had passed the village. ‘One had to walk barefoot on the hot sand, and then swim across two canals to reach school,’reminisces Milkha.‘In the summer the heat was so unbearable that my bare feet couldn’t take it. To avoid getting blisters on my soles, I would run as fast as I could from one shady patch to another. Perhaps my first experience of running can be attributed to that journey.’
Milkha overcame these obstacles every day without a hint of complaint till life threw a fresh challenge at him. The year: 1947. The event: India’s Partition.