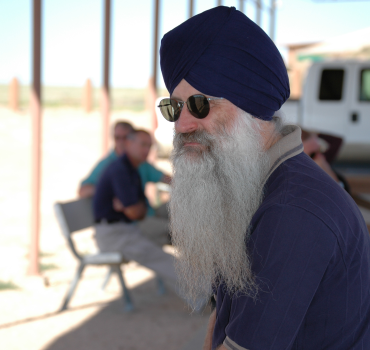 ‘Have a good flight, mate,’ called out the passenger sitting next to me with his wife. His bushy moustache reminded me of the Australian pace bowler Merv Hughes. ‘And you, sir,’ I replied as the Frontier airline aircraft took off from Denver on way to Albuquerque in New Mexico. ‘If you have one, so shall we,’ he said, and I looked at him, astonished at the remark.

‘Sure,’ I replied somewhat sternly as another rude remark was only going to make me more determined to complete my on-going project. In fact, what the couple—for whom it seemed this was their maiden flight—didn’t know was that I was airborne to meet some very unique Sikhs. Sikhs whose mission was to keep America, Americans and the world secure from perpetrators of violence. A mission inspired by the teachings of the sixth Sikh Guru, Guru Hargobind (1595–1644) who had had two swords girded around his waist: one to symbolise spiritual power, and the other temporal. And Akal Security—Akal meaning timeless in Sikh scriptures—founded in 1980 by Gurutej Singh Khalsa, an American Sikh,who converted to Sikhism after he came in contact with Harbhajan Singh Yogi, a spiritual teacher and entrepreneur, in 1969. Set up as a small-time patrol service to provide professional security to the New Mexico markets of Santa Fe and Espanola, in twenty-six years the headquarters of Akal Security has grown to become one of America’s largest private security providers, protecting courthouses, US Marshals Service, US Army facilities critical to Homeland Security, besides airports, harbours, transportation centres and corporate giants.

If it was Gurujot Singh Khalsa who had led an ITES revolution in India because his master had ordered him to transfer technology to India, it was the same Harbhajan Singh Yogi who, with a single line, had ignited a passion in Gurutej to start his own security agency. Kicked out by the chief of police in 1979 because of his beard and turban, Gurutej had gone to Yogiji to seek his advice. ‘Why do you want to say “yes sir” to all these chaps all your life?’ Yogi had asked. ‘Go start your own agency where you can hire all these guys,’ he said.

And thus Akal Security was born, starting its operations from Gurutej’s living room with Daya Singh, presently vice president, as the co-founder. With a start up loan of 1,500 dollars from friends, Akal Security today is a $550 million group with orders worth $2.5 billion in the years to come. Within the first five years of operation, the Akal model of exceptional service had attracted clients in Texas, Arizona, Nevada, and California, from remote gold mines to modern office complexes. Akal was listed on Inc. magazine’s list of the five hundred fastest-growing companies in the United States for two consecutive years. Akal protects one of the richest men of the world—whose name cannot be disclosed as per contract. But, here’s a hint—the gentleman has connections with Albuquerque town.

Shortlisting Gurutej Singh Khalsa was never going to be tough, as the pioneering work that Akal was undertaking in termsof the heightened security environment post 9/11, was always going to be a thrilling story. ‘It would be a great honour to be part of your book,’ Gurutej Singh had replied to my e-mail. ‘Chardi kala’(Long live).

‘Sat Nam,’ said Gurutej Singh Khalsa; it wasn’t difficult to identify him at the arrival lounge of the airport. A tall man, over six feet, with a flowing beard, Gurutej has a very serene demeanour, his grey eyes adding to the charm. He wore a navy blue Polo shirt with Akal Security embossed on the left side of the chest, light brown chinos and a perfectly tied navy blue turban.

‘Hope you had a good flight,’ he said as we stood at the luggage carousel. ‘Yes, though a bit eventful,’ I replied, telling him how I had barely managed to catch the early morning New York-Denver and about the couple I had met on the Denver-Albuquerque connecting flight. ‘Yeah, you get these kinds of people all over America now,’ replied Gurutej, trying to comfort me.

‘Lunch is at Bibiji’s house at Albuquerque,’ said Gurutej, carrying on the conversation as we exited the airport. The breeze was hot, the day sharp, perhaps an indication of a typical day in a desert. ‘Bibiji?’ I asked.

‘Yogiji’s wife, Bibiji Inderjit Kaur. She has hosted a lunch in your honour as she wants to meet you,’ said Gurutej.